Upon one particularly starry and firefly strewn night, two adventurers sought for they knew not what. But across the dark expanse, their feet did wander and together they pondered where they might go and seek.

They progressed with courage and prudent vigilance. Their flashlights illuminating soft glows in the eyes of the Raccoon Rickie’s all around, daunting the tree tops like a second set of diamonds on velvet.

The glow gave them no-pause for fear as they trusted the Rickie’s to watch over them via their golden stares, falling on the Masters who traverse that anomalous delta in search of their anonymous known.

Their shrieks of laughter and shouts of joy dotted the landscape, blinking in and out of existence as fast as more could appear.

And such a party had not been seen but since the night before.

Still the wanderers pressed on and their path crossed with Dude the toad, who seemed to be in some distress. Though he could not speak, he refused to leave and fell astride keeping besides wanderers where ever they would go.

The travelers did not mind their new found friend however their urgency found him falling behind, so they promised to come back again.

They wandered on into the land with all the Charlotte’s in their webs. Picking here and there, a stick or two for the forest to spare. Arms now full of the unknown treasures the pair turned to go back and found one blocking their way, a grumpy looking Mister the cat.

The lovers paused beneath the stars of the night, under the eyes of the Rickie’s and against the backdrop of Fiona’s dancing friends.

Mister the cat’s accusing stare remained on them for one long moment before he finally sank, disappointed, back into the black canopy from whence he came.

The pair looking at each other, hurried back along their path to find their wart covered friend, finding him alone but safely camouflaged amongst the blinking din of his firefly friends. Knowing he would now be safe, thanks to the travelers’ stare-down with Mister the cat, it was Dude the toad that this time took his leave of them.

The duo watching him go, saw him reach the lake’s edge. He caught a soft glow with his tongue before leaping into the cold dark depths.

But before departing, Dude the toad allowed the travelers to take his pictures and in turn they want that to share with you.

At first, we thought Dude the Toad didn’t want us to take pictures of him 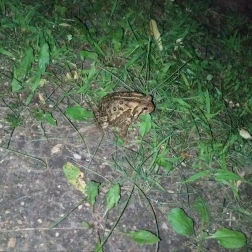 The, we tried to go sideways…

slowly going to the front…

few more steps… and he’s not even moving.

At this point, we assumed he was not scared at all but being friendly.

He just let us take him pictures 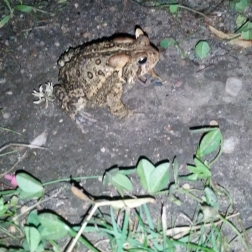 This is the nearest we got.

This site uses Akismet to reduce spam. Learn how your comment data is processed.